Seven years ago, the government of Burkina Faso built the Wayen-Zam Health Centre — yet it opened to patients just three years ago, after community members advocated to have it furnished with supplies and equipment. There were enough materials to open the facility, but the maternity rooms were still sorely lacking.

Meanwhile, the nation’s child mortality rate was 81 per 1,000 live births in 2016, according to government statistics.

That’s why it made such a difference when the Wayen-Zam Health Centre maternity rooms were stocked with a new delivery table as well as 10 beds and mattresses last year. It’s all thanks to Christian Children’s Fund of Canada donors.

The delivery bed brought joy to many women. The fact that they would not have to risk infection by laying on the floor, and would have a professional tending to their needs, encouraged many to deliver at the centre.

Asseta Kaboré (above) is a testament to the positive changes. I met her while she was waiting to see a nurse for her 22-day-old’s check-up.

She was happy to return to the place where she gave birth to her seventh child with considerably less stress than with her other children. “For the previous children, it was always a moment of great fear and worries,” confesses Asseta. 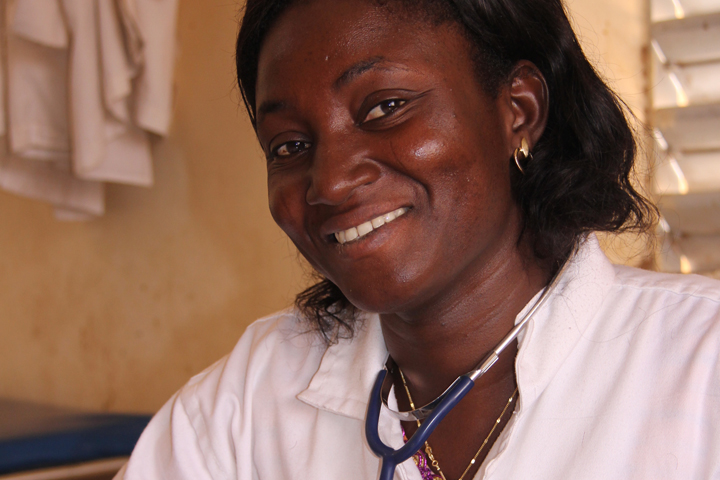 In Wayen-Zam, home to 500, most women who were ready to deliver travelled 12 km to the nearest health centre in Kougri. Most of them didn’t have appropriate transportation.

Sendrine, another woman who recently gave birth at the local health centre, told me how difficult it was to travel far for medical help. Even though she always preferred to deliver with the assistance of a health worker, she remembers women who refused to go to Kougri for their delivery, because it was too far. “Now, with the delivery bed close, there is no excuse for women to deliver at home with all the risk they might face,” affirms Sendrine.

The seasoned mom still remembers the fears she had when she delivered her older children. “I went to Kougri. Every time it was difficult, and I was really worried; we never knew what could happen — not during the delivery, but in the conditions around it.” She had good reasons to be worried. Her husband would have taken her to the health centre on a bicycle or a moped. Thankfully it’s now easier for many women to make the journey.

In fact, Adèle Yaméogo (above), head nurse at the Wayen-Zam Health Centre, has noticed an uptick in patients at the centre. “We used to receive between 800 and 1,000 patients monthly at the peak of the malaria epidemics (July to November),” she says. “This year during the same period, we received the equipment, and we recorded between 1,500 and 2,000 patients.”

She adds: “One day, a (young lady) we received refused to go home. She confessed she wanted to take advantage of the mattresses for a moment, because she only had a mat at home.”